All are welcome to play in trophy competitions subject to the following:
1. To qualify to win a Wags trophy a member is required to have played a minimum of 6 friendly days (includes Scrambles) in the previous 12 months but up to 3 Wags matches can be included.
2. For pairs competitions one of the competitors only is required to qualify for both to win.
3. For the John Crump Trophy (Summer Knock Out) rule 1 would be applied with effect from the date of draw for the competition (2 weeks before the first round). This competition was inaugurated in 1997 and the tankard presented to the Wags by the then President, George Barton. 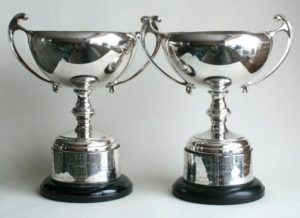 Bertie Brown was a founder member of the Wags and was very fond of Fensomes. The cups were presented in 1976 in his memory.

A fensomes competition, played in pairs. 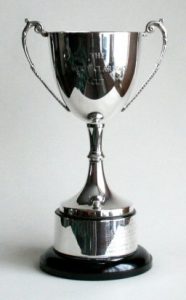 This cup was presented in 2001 by Lawrie Clarkson is a Medal competition, “the way golf should be played” Lawrie said. Assisting our Scribe for many years, Lawrie took an active interest in the Wags until his death in 2013, aged 101.

This handsome trophy was presented in 1981 in memory of Cyril Thomas, a founder member of the Wags. Foursomes Stableford. 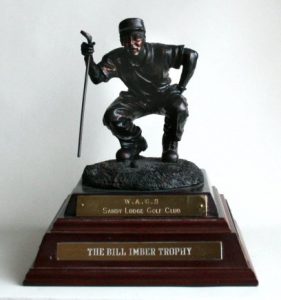 This trophy is in memory of Bill, a member of the Wags for many years, who died in 2002. Bill is remembered as a courteous, peaceable, fun-loving Wag, a true gentleman. The significance of the trophy is that Bill had a very individual putting style. Played as an individual Stableford. 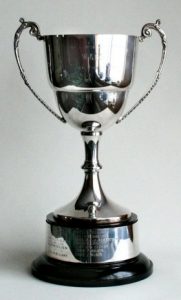 This cup competition was inaugurated in 1994 in celebration of the 25th Anniversary of the founding of the Wags.

Played as an individual Stableford using 4 clubs and a putter. This is not a handicap qualifying competition. 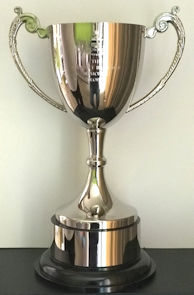 For many years Stewart organised a day at Aldenham Golf Club for some of his Wags friends and it was decided to continue with this when he passed away. In 2021 we had our first day at Aldenham in his memory.

The Wags was formed in 1969 and Harvey Boone was one of the founder members and was President of the Wags from 1977 to 1981. He was an optician and had a half-day on Wednesdays and played golf with Cyril Thomas and Bertie Brown, their association developing into the Wags as we know it today. 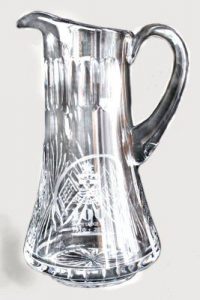 This competition was inaugurated in 2010 in celebration of the Centenary of Sandy Lodge Golf Club and was originally an 11-hole competition so that our older members could take part. It is a charity event and all proceeds go to the Vice-Captain’s charity. 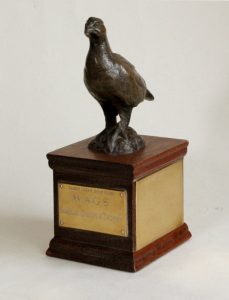 This trophy was donated by the Famous Grouse Company in 1989 and the winner of the Stableford competition bearing its name was traditionally given a bottle of their whisky. This competition was dropped in 2001, and in 2015 it was decided to play for this trophy in our new Par 3 Competition.

The winner of this competition receives a prize provided by the Wags Captain.

Donald’s widow presented this fine salver in 1989 in memory of her husband. The competition is played over 11 holes. It is an opportunity to enter a competition for those who are no longer able to play 18 holes.

The competition for the Wags Putter was started in 2015 when the Cann & Taylor antique putter was donated by Kamal Sood and mounted by a local craftsman.

The competition is played over 18 holes without handicaps and was originally played on the same date as the 11 – hole Donald Brown Salver. 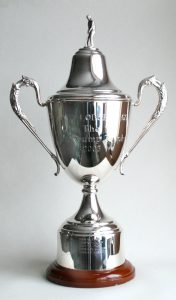 This trophy was presented in memory of John Crump by his daughter. John was a long-standing and much respected member of the Wags. He died in 2004, just before his 91st birthday and was playing golf on a regular basis until one month before his death. John will be remembered for many years to come, particularly as the Summer Knockout competition is now played for this trophy. 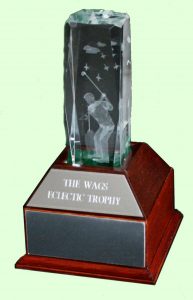 This fine trophy, presented in 2015 by Peter Tanner, is an interesting addition to our competitions and is played over 3 of our six individual competitions during the year. 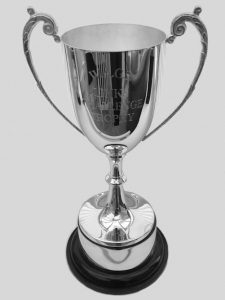 Inaugurated in 2018, this handsome trophy is presented to the winner of a competition played on the Wags Links Tour organised by Steve Smithson. 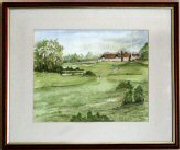 This watercolour, belonging to George, was presented to the Wags in 2008 by his daughter. George was a member of the Wags for many years and was a true gentleman in word and deed. The three winners of the Christmas 11-hole Scramble share this prize for one year.